From Wikipedia, the free encyclopedia
Jump to navigation Jump to search
Generalization of the alphabetical order of dictionaries to sequences of elements of an ordered set
For similarly named ordering systems outside mathematics, see alphabetical order, natural sort order, lexicographic preferences, and collation.

In mathematics, the lexicographic or lexicographical order (also known as lexical order, or dictionary order) is a generalization of the alphabetical order of the dictionaries to sequences of ordered symbols or, more generally, of elements of a totally ordered set.

There are several variants and generalizations of the lexicographical ordering. One variant applies to sequences of different lengths by comparing the lengths of the sequences before considering their elements.

Another variant, widely used in combinatorics, orders subsets of a given finite set by assigning a total order to the finite set, and converting subsets into increasing sequences, to which the lexicographical order is applied.

The words in a lexicon (the set of words used in some language) have a conventional ordering, used in dictionaries and encyclopedias, that depends on the underlying ordering of the alphabet of symbols used to build the words. The lexicographical order is one way of formalizing word order given the order of the underlying symbols.

The formal notion starts with a finite set A, often called the alphabet, which is totally ordered. That is, for any two symbols a and b in A that are not the same symbol, either a < b or b < a.

with no symbols at all. The lexicographical order on the set of all these finite words orders the words as follows:

However, in combinatorics, another convention is frequently used for the second case, whereby a shorter sequence is always smaller than a longer sequence. This variant of the lexicographical order is sometimes called shortlex order.

In lexicographical order, the word "Thomas" appears before "Thompson" because they first differ at the fifth letter ('a' and 'p'), and letter 'a' comes before the letter 'p' in the alphabet. Because it is the first difference, in this case the 5th letter is the "most significant difference" for alphabetical ordering.

The lexicographical order is used not only in dictionaries, but also commonly for numbers and dates.

One of the drawbacks of the Roman numeral system is that it is not always immediately obvious which of two numbers is the smaller. On the other hand, with the positional notation of the Hindu–Arabic numeral system, comparing numbers is easy, because the natural order on nonnegative integers is the same as the variant shortlex of the lexicographic order. In fact, with positional notation, a nonnegative integer is represented by a sequence of numerical digits, and an integer is larger than another one if either it has more digits (ignoring leading zeroes) or the number of digits is the same and the first (most significant) digit which differs is larger.

When negative numbers are also considered, one has to reverse the order for comparing negative numbers. This is not usually a problem for humans, but it may be for computers (testing the sign takes some time). This is one of the reasons for adopting two's complement representation for representing signed integers in computers.

The monoid of words over an alphabet A is the free monoid over A. That is, the elements of the monoid are the finite sequences (words) of elements of A (including the empty sequence, of length 0), and the operation (multiplication) is the concatenation of words. A word u is a prefix (or 'truncation') of another word v if there exists a word w such that v = uw. By this definition, the empty word (

); care must be taken if these cases are to be excluded.

With this terminology, the above definition of the lexicographical order becomes more concise: Given a partially or totally ordered set A, and two words a and b over A such that b is non-empty, then one has a < b under lexicographical order, if at least one of the following conditions is satisfied:

Notice that, due to the prefix condition in this definition,

is the empty word.

is a total order on

then so is the lexicographic order on the words of

However, in general this is not a well-order, even if the alphabet

Since many applications require well orders, a variant of the lexicographical orders is often used. This well-order, sometimes called shortlex or quasi-lexicographical order, consists in considering first the lengths of the words (if length(a) < length(b), then

), and, if the lengths are equal, using the lexicographical order. If the order on A is a well-order, the same is true for the shortlex order.[2][3]

is a sequence whose

the lexicographical order on the Cartesian product

The result is a partial order. If

are each totally ordered, then the result is a total order as well. The lexicographical order of two totally ordered sets is thus a linear extension of their product order.

One can define similarly the lexicographic order on the Cartesian product of an infinite family of ordered sets, if the family is indexed by the nonnegative integers, or more generally by a well-ordered set. This generalized lexicographical order is a total order if each factor set is totally ordered.

Unlike the finite case, an infinite product of well-orders is not necessarily well-ordered by the lexicographical order. For instance, the set of countably infinite binary sequences (by definition, the set of functions from non-negative integers to

also known as the Cantor space

) is not well-ordered; the subset of sequences that have precisely one

Functions over a well-ordered set[edit]

The functions from a well-ordered set

to a totally ordered set

may be identified with sequences indexed by

They can thus be ordered by the lexicographical order, and for two such functions

is also well-ordered and

is finite, then the resulting order is a well-order. As shown above, if

is infinite this is not the case. 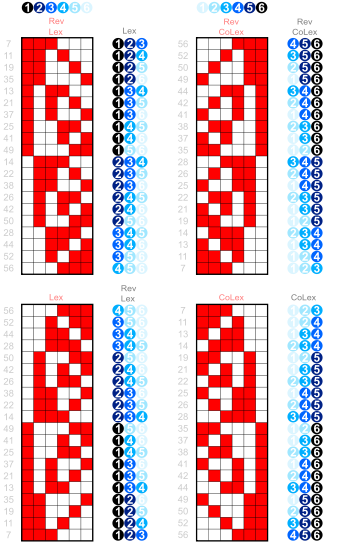 Orderings of the 3-subsets of

represented as sets of red squares, increasing sequences (in blue), or by their indicator functions, converted in decimal notation (in grey). The grey numbers are also the rank of the subsets in all subsets of

In combinatorics, one has often to enumerate, and therefore to order the finite subsets of a given set

For this, one usually chooses an order on

Then, sorting a subset of

In this context, one generally prefer to sort first the subsets by cardinality, such as in the shortlex order. Therefore, in the following, we will consider only orders on subsets of fixed cardinal.

For example, using the natural order of the integers, the lexicographical ordering on the subsets of three elements of

be the free Abelian group of rank

whose elements are sequences of

integers, and operation is the addition. A group order on

is a total order, which is compatible with addition, that is

The lexicographical ordering is a group order on

linear forms with real coefficients, define a map from

Robbiano's theorem is that every group order may be obtained in this way.

More precisely, given a group order on

there exist an integer

linear forms with real coefficients, such that the induced map

has the following properties; 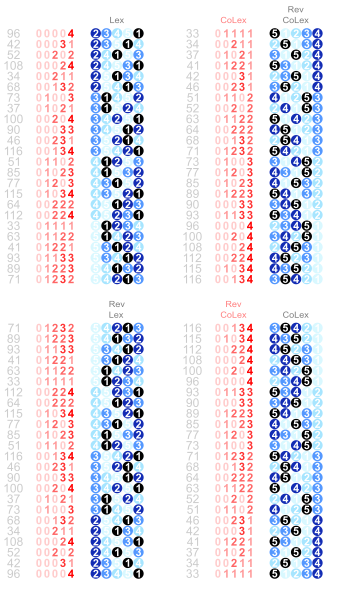 Orderings of the 24 permutations of {1,...,5} that are 5-cycles (in blue). The inversion vectors (in red) of permutations in colex order are in revcolex order, and vice versa.

the colexicographical order is defined by

For example, for ordering the increasing sequences (or the sets) of two natural integers, the lexicographical order begins by

and the colexicographic order begins by

When considering polynomials, the order of the terms does not matter in general, as the addition is commutative. However, some algorithms, such as polynomial long division, require the terms to be in a specific order. Many of the main algorithms for multivariate polynomials are related with Gröbner bases, concept that requires the choice of a monomial order, that is a total order, which is compatible with the monoid structure of the monomials. Here "compatible" means that

if the monoid operation is denoted multiplicatively. This compatibility implies that the product of a polynomial by a monomial does not change the order of the terms. For Gröbner bases, a further condition must be satisfied, namely that every non constant monomial is greater than the monomial 1. However this condition is not needed for other related algorithms, such as the algorithms for the computation of the tangent cone.

As Gröbner bases are defined for polynomials in a fixed number of variables, it is common to identify monomials (for example

of a monomial order of

(see above § Group orders of

For the lexicographical order, the same exponent vectors are ordered as