Tutorials > Deploy a Next.js App to App Platform
Give Feedback

Next.js is unique framework built on top of React. It lets you build React apps quickly because it comes with features like Image Optimization, Zero Config, Incremental Static Generation, File-system Routing, Code-splitting and Bundling and more.

Next.js deployment is unique in that it lets you deploy a couple different ways:

For large sites, a Static Export may not be the best solution. Static Exports can take a long time for sites that have thousands of pages like e-commerce sites or large blogs. A Node.js Custom Server lets you do static incremental regeneration. Instead of generating your entire site’s HTML at once, you can generate pages on the fly. This is beneficial because you don’t have to wait to build/export your entire site; you can generate it as users visit each page.

In this tutorial, you will deploy a Next.js application to DigitalOcean’s App Platform using a Static Export and a Custom Server. App Platform is a Platform as a Service (PaaS) that lets you deploy applications from a GitHub repo.

To complete this tutorial, you will need:

You’ll need a Next.js application to deploy to App Platform, so in this step you’ll create one with create-next-app, the CLI tool to generate new starter Next.js apps. You can also find the completed app at the DigitalOcean Community GitHub repository.

This creates the my-next-app directory, initializes the directory as a Git repository, and makes an initial commit:

Inside that directory, you can run several commands:

We suggest that you begin by running:

Switch to the my-next-app directory:

DigitalOcean App Platform deploys your code from GitHub repositories, so you’ll need to push your local repository to GitHub. The create-next-app command already made an initial commit, so you don’t have to commit your files first.

Open your browser and navigate to GitHub, log in with your profile, and create a new repository called sharkopedia. Create an empty repository without a README or license file.

Once you’ve created the repository, return to the command line to push your local files to GitHub.

Next, rename the default branch main, to match what GitHub expects:

Your files will transfer.

Deploying Next.js as a Static Site

To deploy the Next.js app to App Platform as a Static Site, you’ll use Next’s built-in commands to generate all of your HTML files. You first call next build, followed by next export. To make it easier, create a single npm run export command that calls both.

Open package.json in your editor and add the following export script to the file:

The export command runs npm run build first, which in turn runs next build. It then runs next export. App Platform looks for HTML files in a _static folder, so this command uses the -o switch to create the folder that App Platform wants to see and populate it with the static files.

You can run this command locally and see the new _static folder.

The command generates the files:

You now have to commit your code to GitHub so that you can update your GitHub repo for deploying to App Platform.

First, add the _static folder to the .gitignore file so you don’t check it in. Open .gitignore in your editor and add these lines to the end:

Save the file and return to your terminal.

Run the following command to add the changed files:

Push the code to GitHub:

Once the code is pushed, go into your DigitalOcean App Platform Dashboard and create a new app by pressing the Create App button.

Select the GitHub repository that contains your app and then press Next.

App Platform will detect that you have a Node.JS app. Change the type from Web Service to Static Site. Then change the build command to use the new export command you created by entering npm run export. Press Next to move to the next step.

On the final page, select the Starter plan and press the Launch Starter App to deploy your app. You’ll see your new live URL in your dashboard. Visit the link to see your site deployed.

You have successfully deployed Next.js as a Static Site to App Platform. Next, you will see how to deploy Next.js as a Custom Server to take advantage of the Incremental Static Generation feature that Next.js offers.

Deploying Next.js as a Custom Server

In addition to deploying Next as a static site, you can deploy it as a custom server. This means that you are deploying a Node server that can serve pages dynamically or statically.

The process is called incremental static regeneration. Next will wait for a user to visit a page and then generate the static HTML for that page. If a second user visits that same page, Next will serve the static file instead of generating it dynamically.

Next already has this feature built in using its next start command in the package.json scripts. All you have to do to use it with App Platform is to pass it a host and a port. App Platform listens by default on 0.0.0.0 on port 8080.

To configure this, update the start script in package.json and specify the port and host. Open package.json in your editor and modify the start command so it looks like the following:

You now have to commit your code to GitHub so that you can update your GitHub repo for deploying to App Platform. Run the command:

Push the code to GitHub:

Now you can deploy this Next.js app to App Platform as a Web Service. You’ll be deploying from the same GitHub repo. The main differences are that you’ll choose Web Service instead of a Static Site and you’ll also change your build command.

Select your repository from GitHub:

Then name the application, choose your region, and ensure you’re using the main branch:

Press Next to continue.

Then ensure that the Type is set to Web Service. Use npm run build as the Build Command and npm start as the Start command: 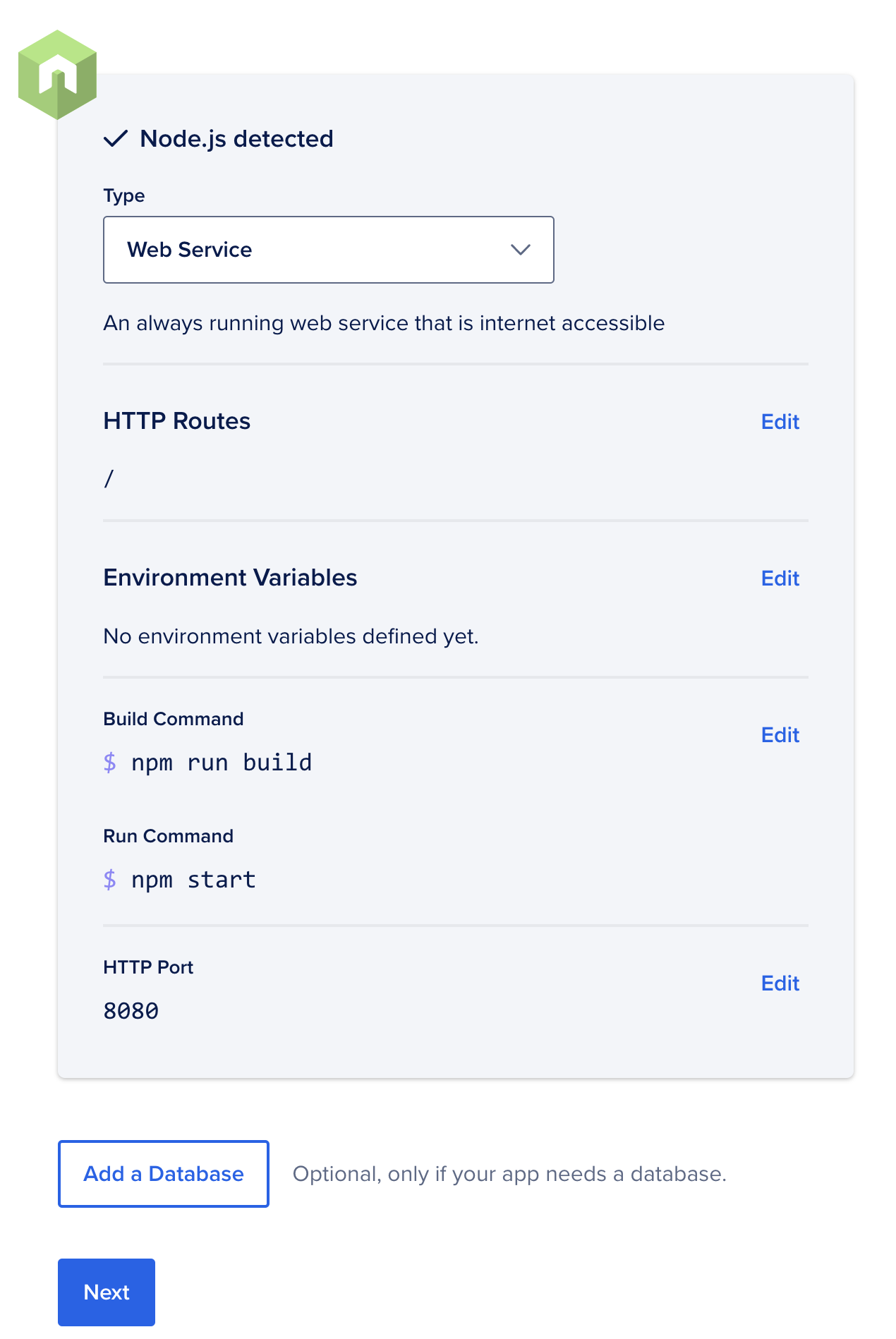 Press Next to continue.

Now choose the type of plan. Since this isn’t a static site, you won’t be able to use the Starter plan. Choose the Basic plan.

Choose the 1GB Ram | 1 vCPU option for the Container, and leave the Number of Containers set to 1. Then press Launch Basic App.

After a short time, your app is deployed. You can follow the URL displayed to visit your app in the browser. 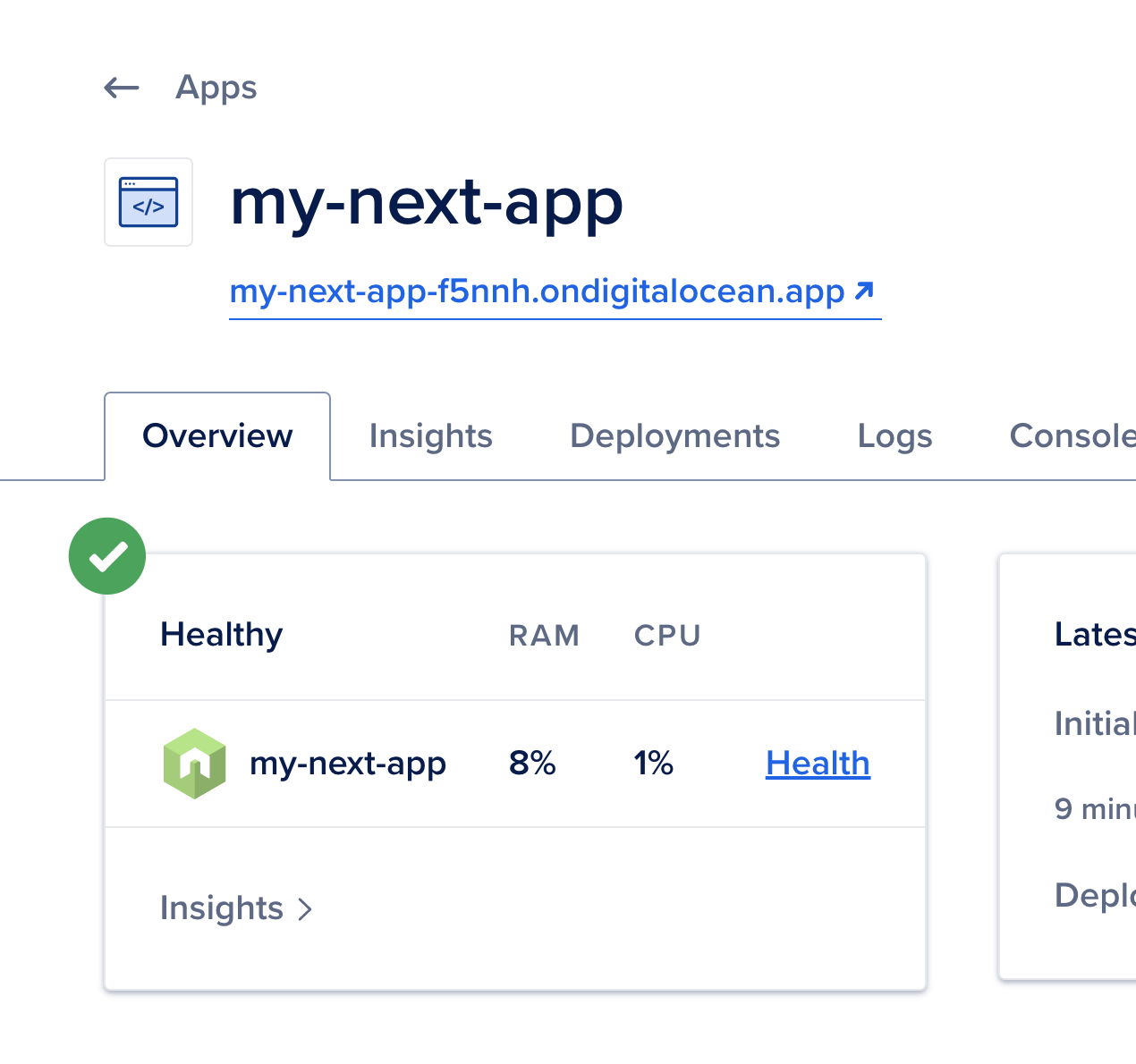 As you make changes to your code and push them to your main branch on GitHub, your application will automatically redeploy.

In this tutorial, you:

You can use this workflow to develop your own website using Next.js. You may also want to add a web service and a database to the current app and create your own API that your Next.js app can consume, or use Next’s API Routes to create a small API.

Once you have deployed the app and used it, you can delete the application or deploy other sample applications.