Electrical Engineering Stack Exchange is a question and answer site for electronics and electrical engineering professionals, students, and enthusiasts. It only takes a minute to sign up.

Why does my MOSFET always burn?

I have a circuit that uses a MOSFET to power a resistive plate to heat it up.

The problem is that this MOSFET always burns after a few seconds.

Let me explain my circuit:

First, the outlet AC voltage (230V AC) is turned into DC voltage via a full-bridge rectifier (D1) and with a capacitor (C2.)

Then, VCC is applied to a resistive pad (CN3) connected to MOSFET to let the power go in. This MOSFET is controlled by a 5V signal from a microcontroller connected to an optocoupler (U3.) R5 and D2 form a 12V voltage applied to the MOSFET gate in order to turn it on/off. 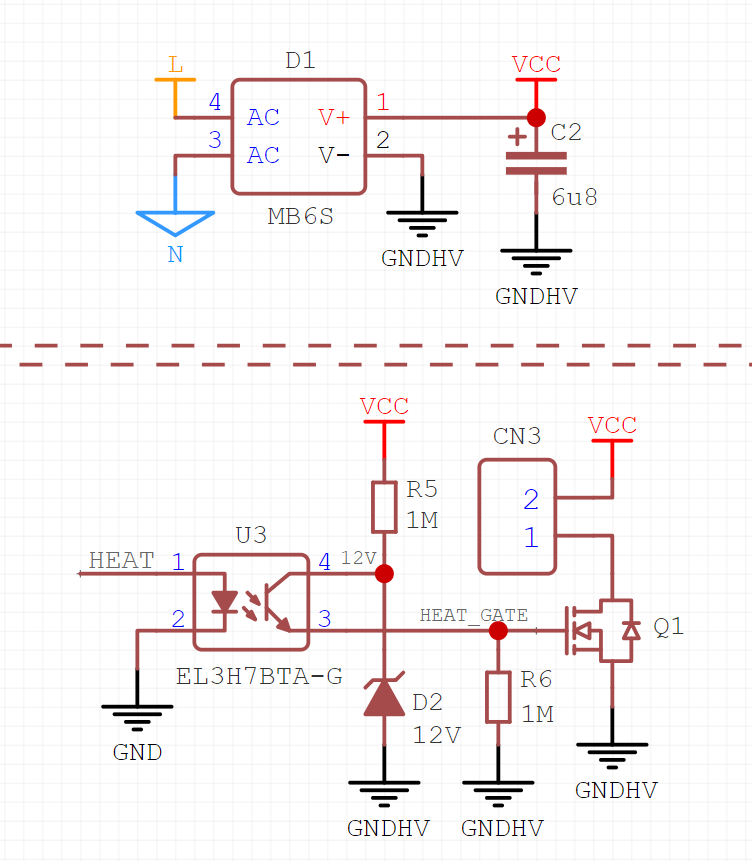 I think that the MOSFET dies because of overcurrent or overvoltage but all specifications fit with my usage in theory.

Your steady state losses are excessive; you say there's no heatsink, but 1.5 W (incidentally, your current of 1.5 A will actually result in a power loss of about 2.1 W, remember P=I²R. But let's just go with the 1.5 W figure now; you'll see that even that is too much.) in a little DPAK MOSFET will definitely require a heatsink. Your thermal resistance rating (according to this datasheet, page 2) is 62 K/W on a minimum-size footprint, at 1.5 W that's 93 °C temperature rise.

That on its own would be fine--if that stayed 1.5 W, at least. But it doesn't; if you look at figure 7 on page 6, you can see that the on-resistance of the MOSFET increases with temperature, and at 93 °C above ambient (let's round that to a junction temperature of 120 °C), the typical on resistance is as high as 1.8 Ω, or even 2 Ω in the worst case. This means you'll be dissipating double the power you thought you were, which is definitely more than enough to destroy the FET.

Needless to say, the story is even worse with the IRFR320 you said you also tried; that one has 1.8 Ω Rds,on even at a Tj of 25 °C. Try changing to something with significantly lower Rds,on; try an IPD60R180, for instance.

The second problem I see is that the only thing pulling the MOSFET gate low is a very large resistor. A resistor to pull the gate low is perfectly fine if you're not switching too fast, but a 1 MΩ resistor is quite a lot, and will turn the FET off very slowly. It'll spend a long time in its linear region every time you turn it off, and that means a lot of power dissipation, much more than the steady-state power. Try using a smaller resistor there, or some sort of active pulldown.

Do you have any cooling or heatsink on the MOSFET?

The on resistance of the MOSFET will cause it to dissipate ~500-600mW of heat. The MOSFET has a thermal resistance of junction to ambient of about 62°C/W if it is soldered to the PCB with the minimum footprint's worth of copper. This value will be worse if it is just soldered using wires, as it doesn't have the copper of the PCB to sink heat into.

Unfortunately, it also has a very high positive resistance temperature coefficient. If you look at the datasheet, the resistance can climb as high as 2.3 Ω as it heats up.

This is known as thermal runaway.

Using Infineon's level 3 thermal SPICE model for that FET, I simulated your circuit using 65°C/W of thermal resistance and it does indeed go into thermal runaway and, well, burn up. The 'voltage' on the vertical axis is actually degrees of temperature rise above ambient. It hits 150°C pretty fast. 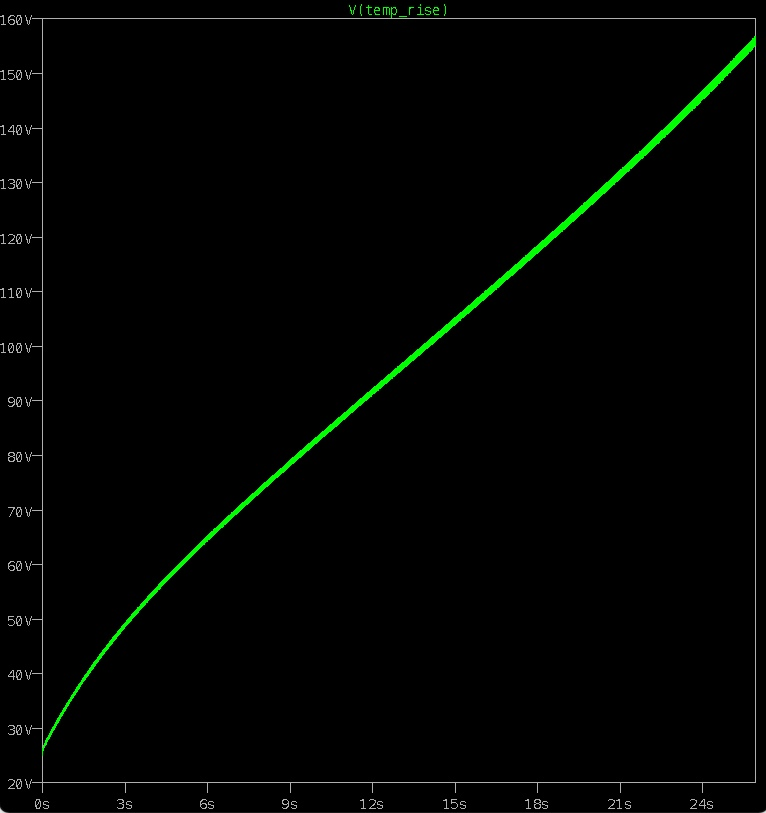 The problem will be even worse with the other FET you tried given that it has almost double the resistance at 25°C and similar thermal resistance.

Yes, 600mW is well below the maximum power dissipation rating of both MOSFETs, but it is important to understand what that spec actually means.

That is the maximum power the MOSFET can dissipate assuming there is no additional thermal resistance from the case to ambient, and only the thermal resistance of the junction to the case, and the case is kept at 25°C. In other words, it is the power the MOSFET can dissipate if it has a thermally perfect interface with an infinitely large heatsink with infinite thermal conductivity.

For the package those FETs are in, they will struggle to dissipate even 1W of heat by itself. The data sheet says that the drain must be soldered to a 40mm x 40mm solid 2oz copper pour on a 1.6mm FR4 1 layer PCB just to lower the thermal resistance to 35°C/W.

If you properly cool the MOSFET, or choose one that will dissipate less power and doesn't have such a poor positive resistance temperature coefficient, that will solve your problem.

If you lower the junction to ambient thermal resistance to 32°C/W (using 40mm x 40 mm of 2oz copper on a PCB), it'll still get pretty toasty but nothing it wasn't made to handle. More importantly, it will reach a steady temperature and not keep getting hotter and hotter: 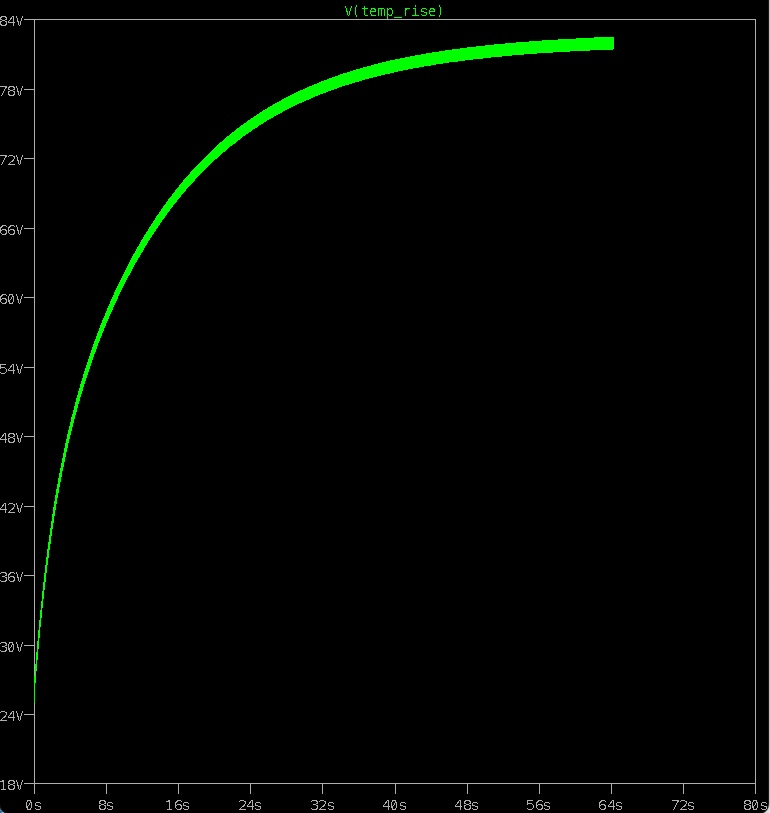 If one changes the optocoupler, it can be "better" ...

And adding a resistor (base Opto to ground) ... one can see the drastic diminution of the power dissipated by MOSFET ( from 26 W to ~3 W).

Not the answer you're looking for? Browse other questions tagged power-supply transistors mosfet pcb-design components or ask your own question.

0
Will the 595 shift register burn out if outputs are always high?
1
Why does a MOSFET enter saturation?
0
Why does this MOSFET always turn on in saturation?
10
P-Channel MOSFET Inrush Current Limiting - Transistor burn issue
0
MOSFET Switch Always On?
1
Always on MOSFET?
1
Why does the breakdown always occur on the drain side for MOSFET?