Worldbuilding Stack Exchange is a question and answer site for writers/artists using science, geography and culture to construct imaginary worlds and settings. It only takes a minute to sign up.

Would the "Rods from God" satellite actually create an explosion?

The "rods from God" satellite. Its a satellite that contains these long darts, presumably made of a very heavy material like tungsten, that are dropped into the atmosphere. By the time they reach the surface, they're moving at hypersonic speeds, lets say Mach +10. It would strike a target with a huge amount of energy, but the question I have is "would that be a conventional explosion like from explosives, or would it basically just be a huge dart that sticks into the ground?" The rod isnt an explosive material, its just very heavy and durable. But with something as heavy as it is moving as fast as it is, the amount of force it has when it hits the ground has to be gigantic. Too big for just an anticlimactic dart piercing into the ground.

science-fiction weapons explosions
Share
Improve this question
asked May 27 at 3:24

First off Mach 10+ is significantly slower than orbital velocity. Objects in low earth orbit are traveling at over 7 kilometers per second, which is roughly Mach 20.

This would be a serious explosion. We have video footage of large objects entering the atmosphere at high speeds. The Chelyabinsk meteor was estimated to be 20m and traveling at a shallow angle into the atmosphere at 19 km/s. When it burst in the air 30km above the surface, it damaged over 7 thousand buildings in 6 cities. The airburst was estimated to be equivalent to 400 kilotons of TNT, roughly 30 times the energy of the atomic bomb dropped on Hiroshima.

Keep in mind that your rod is significantly smaller, and traveling at a much slower speed. In a 2003 proposal the US military estimated that a 6 meter tungsten rod orbiting at 8km/s would hit the ground with the energetic equivalent energy of 11.5 tons of TNT. Far less than an airbursting meteor but keep in mind that when the Mythbusters blew up a cement truck they used the equivalent of roughly 600 lbs of TNT. That's 38 times less energetic than your rod. While such an energetic collision is overkill for soft targets, hard targets, or anything less than a reinforced underground bunker, you wouldn't want to be anywhere near it's point of impact.

You will get a "Dark" Explosion

To understand the difference you have to realize that a kinetic weapon has to transfer energy into a target through physical interactions whereas an explosive or nuclear weapon does not. While a 5e10 Juele explosive releases all of its energy (and light) at the surface, most of the enegry released by a kinetic weapon will happen subsurface. What ever material a kinetic weapon hits only has a limited binding strength to stop the projectile before it becomes displaced. Most kinds of dirt, rock, sand, and soil have low enough of a binding energy that they become displaced before being heated up enough to visibly glow. While the metal rod will have a much higher binding energy and reach a very bright glow before loosing its integrity, nearly all of this ablation will happen underground such the the light from it will be concealed giving you only a minor flash at the moment of impact.

Also, you can not compare a rod from god to something like the Chelyabinsk meteor because a meteor can only airburst like that because it is a heterogeneous mixture of elements where internal element vaporize until they over pressure the yielding strength of the tougher elements. A pure element like tungsten will always ablate from the outside in during re-entry. Since tungsten has a very high melting point, and the rod has a very narrow cross section, it may in fact heat up enough to glow a good bit by the time it reaches the Earth, but it will still have plenty of integrity to spare when it hits which is the whole point of using tungsten to begin with. 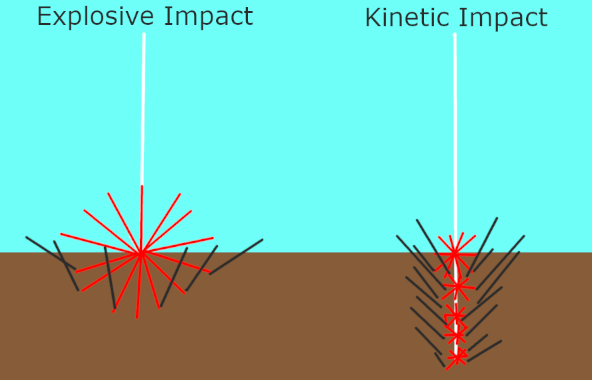 The exception to this rule is when you hit somethin with more binding strength. When you strike steel for example, it will resist the kinetic impactor more before being displaced allowing it to reach temperatures needed to glow; so, you can still get a bright flash that is not concealed by non-glowing debris as shown by this tank being hit by a 30mm autocannon where strikes against the armor create bright flashes, but adjacent strikes against the ground kick up dark plumes of dirt. Striking a tank with a rod from god though will probably still kick up more dust than glowing metal because it will massively over-pernitrate the tank, but perhaps a large steel bunker or warship could still have a significant flash. 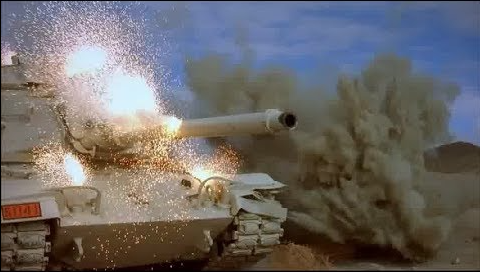 Neither meteorites are made of explosive materials, but when they reach the ground they create an explosion.

Basically, an explosion is caused by the release of a large amount of energy in a very short time: it can be chemical energy in an explosive, nuclear energy in a nuke, kinetic energy in a meteorite and so on.

Whenever that happens, you have a boom.

As others have said, yes. It would release a ton of force which would destroy the surrounding area and create a cloud of pulverized ejecta. But it wouldn't be like an explosion from bombs, which have a lot of light. It would mostly just be dark particulates and larger debris.

However, if going fast enough, the rod would be incandescent from the heat of atmospheric entry.

How much damage, that is complex and based upon the mass, velocity, angle of impact, and the material the target is made up of. So the level of damage too hard to really calculate in a simple formula. It needs a lot of context to do accurately.

Not the answer you're looking for? Browse other questions tagged science-fiction weapons explosions .

39
What would be the ideal melee weapon for someone with superhuman strength?
4
The ultimate weapon from nowhere
6
How can I make an anti-matter "rod" warhead for interplanetary delivery?
3
What would happen to a planet after a quarter of it had been blown up?
4
What would be the ideal way to weaponize plasma?
2
Is using Casaba Howitzer like devices as precision-cutting implements plausible?
7
Is my plasma weapon design any good?
6
Realistically, what type of weapon is the best at delivering a specific radiation in space battle?
3
Is a lightning based minefield in space feasible?
4
What threat would a highly technological alien species from a superEarth pose to human(-like) visitors?