Here are some of the noteworthy changes that are shipping to Stable in 1.10. Thanks to our diligent beta users for helping us test these out and ensure that they deserve the stable designation

A few commonly used inputs and other controls got added. Open the Style Guide in Atom to see how you can use them in your package or further style in your theme.

All the Little Things

For a comprehensive list, don’t forget to check the release notes!

This version features performance and stability improvements and, in particular, we’re excited that Atom now asks for permission before sending any telemetry data.

On launching 1.11 for the first time, all users will be presented with this screen asking for their assistance in improving Atom by allowing us to collect information while they use the application: 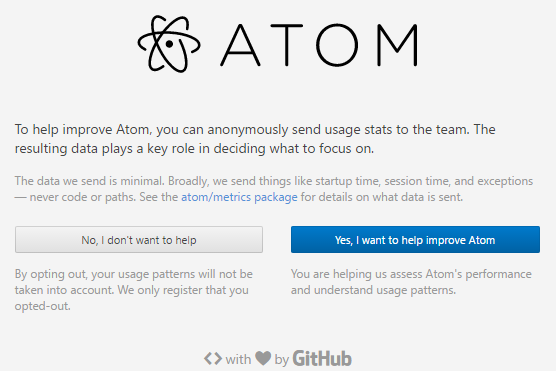 This is something that a lot of users have been asking for. We’ve always had ways to opt out but it is only right to make it obvious and clear. Now it is!

Again, don’t forget to check out all the other improvements shipping with this version in the release notes!