Cryptography Stack Exchange is a question and answer site for software developers, mathematicians and others interested in cryptography. It only takes a minute to sign up.

Can a series of triangle reflections be used for cryptography?

(I guess no but why is this the case? Any way to make it possible?)

Given just two random triangle T1 and T2 (and $\mathbb F_N^D $) can an adversary compute the shortest way from T1 to T2?
(Assuming there is a way and modulo $N$ and dimensions $D$ are choosen high enough that testing all triangle would take to long)
Or can he do it (much) faster than just applying it step by step?
(like for example at EC a generator $g$ don't need to be applied $m$ times if we want to compute $g^m$. I'm looking for a more-than-one-dimensional technique which can not be reduced to a single dimension problem and need to be computed step-by-step. The 'length' of the 'shortest way' would be the number of (triangle) computations needed)

Edit: fgrieu pointed out there is also a much easier way to compute the reflection of an equilateral triangle: $$A_M = A' = B+C-A$$ (edit end)

I did some tests for 2 dimensions and primes $N$.
The finite field $\mathbb F_N^2 $ can only produce a equilateral triangle if $N$ has a root for $3$.

A equilateral triangle with a given edge-length is able to produce $2 N^2$ other triangles (each has the same edge-length). Each edge length has two such sets. In total $2(N-1) (2N^2)$ which are disjoint with each other.

In euclidean space mirroring a triangle around point ($C$) would look like this:
Frist mirror $A$ at $CB$. Then mirror $B$ at $CA_M$ and so on. If it is a equilateral triangle it will match up again after doing this 6 times. 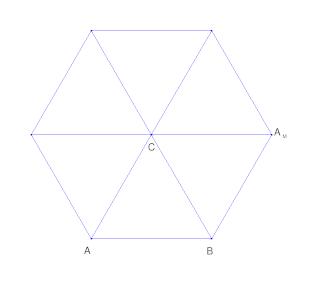 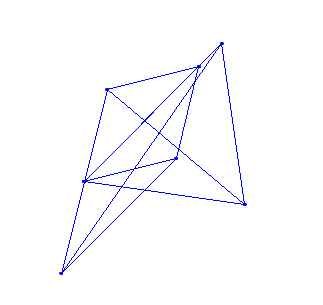 Does a cryptography algorithm similar to this exist?
Why is this not secure? Or is it? Would more dimensions help?
Any ideas to make it more secure?

From the second triangle, we can find an neighbouring triangle that has the same orientation as the first one (all the points will be shifted by the same vector). So we are interested in finding a path between one distinguished corner or the two triangles. It forms a two-dimensional lattice: e.g. $A_M$ can go to $A$ or to it's upper counterpart (on the continuation of $BC$). These two vectors form a basis. We can also include the third vector (going from $A_M$ down through two triangles): it is "redundant" but we need it since we want to find short coordinates, and these three vectors cover all 6 directions.

Now we just want to express the vector connecting the distinguished corner of the two triangles, in our (redundant) basis. This already should hint towards weakness of the problem, since we "just" need to find 3 numbers (coordinates in the basis), i.e., the order of steps does not matter.

This leads to CVP (close vector problem) instance, which can be solved by Babai's algorithm and LLL (you would have a few extra dimensions for coordinates and to add the modulus reduction into the lattice).

Going into higher dimensions might make LLL less effective. I don't know the details about that, but it seems that the basis we have is already reasonably good, so that LLL should find very good decompositions of paths.

Not the answer you're looking for? Browse other questions tagged algorithm-design provable-security attack or ask your own question.

3
Chance in cryptography
9
How simple can the PRP used in the Even-Mansour scheme be?
9
How can I attack a Triple-Block cipher with 2 keys (like 3DES) with a cost of ≤ 2⁵⁶
0
Is there a method to encrypt relations in between values of a cyclic value set and generate values out of this set with pseudo RNG? (all at user PC)
7
Rabin-Williams signature and it's reduction to factorization
7
Difference between Generic Group Models
4
Quantitative reduction of Schnorr's identification scheme to DLP