The Mars 2020 Perseverance Rover will search for signs of ancient microbial life, which will advance NASA's quest to explore the past habitability of Mars. The rover has a drill to collect core samples of Martian rock and soil, then store them in sealed tubes for pickup by a future mission that would ferry them back to Earth for detailed analysis. Perseverance will also test technologies to help pave the way for future human exploration of Mars.

Strapped to the rover's belly for the journey to Mars is a technology demonstration — the Mars Helicopter, Ingenuity, may achieve a "Wright Brothers moment “ by testing the first powered flight on the Red Planet.

There are several ways that the mission helps pave the way for future human expeditions to Mars and demonstrates technologies that may be used in those endeavors. These include testing a method for producing oxygen from the Martian atmosphere, identifying other resources (such as subsurface water), improving landing techniques, and characterizing weather, dust, and other potential environmental conditions that could affect future astronauts living and working on Mars. 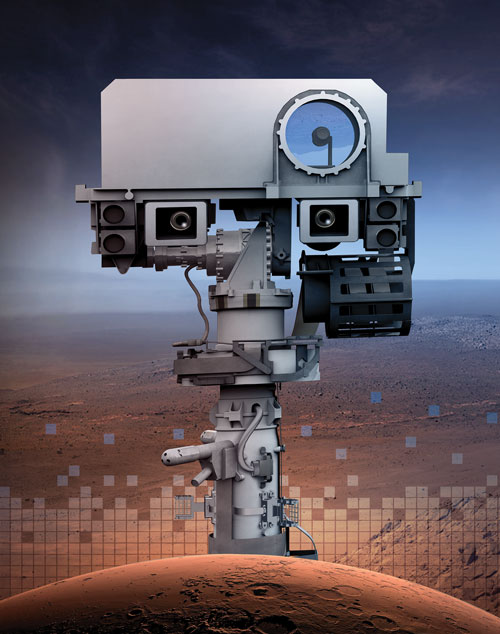 Mission Duration:
At least one Mars year (about 687 Earth days)

All address key astrobiology questions related to the potential of Mars as a place for life. The first three consider the possibility of past microbial life. Even if Perseverance does not discover any signs of past life, it paves the way for human life on Mars someday.

Technologies for Entry, Descent, and Landing

The mission uses technological innovations already demonstrated successfully, especially for entry, descent, and landing (EDL). Like NASA's Curiosity rover (, the Mars 2020 spacecraft uses a guided entry, descent, and landing system. The landing system on Mars 2020 mission includes a parachute, descent vehicle, and an approach called a "skycrane maneuver" for lowering the rover on a tether to the surface during the final seconds before landing.

This type of landing system provides the ability to land a very large, heavy rover on the surface of Mars in a more precise landing area than was possible before Curiosity's landing. Mars 2020 takes things one step further. It adds new entry, descent, and landing (EDL) technologies, such as Terrain-Relative Navigation (TRN). This sophisticated navigation system allows the rover to detect and avoid hazardous terrain by diverting around it during its descent through the Martian atmosphere. A microphone allows engineers to analyze entry, descent, and landing. It might also capture sounds of the rover at work, which would provide engineers with clues about the rover's health and operations, and would be a treat to hear.

The Perseverance rover design minimizes costs and risks because it is largely based on the engineering design for the previous Curiosity rover. The Perseverance long-range mobility system allows it to travel on the surface of Mars over 3 to 12 miles (5 to 20 kilometers). Improvements on Perseverance include a new, more capable wheel design. And for the first time, the rover carries a drill for coring samples from Martian rocks and soil. It gathers and stores the cores in tubes on the Martian surface, using "depot caching." Caching demonstrates a new rover capability of gathering, storing, and preserving samples. This could potentially pave the way for future missions to retrieve the samples and ferry them to Earth for intensive laboratory analysis.

Perseverance tests a technology for extracting oxygen from the Martian atmosphere, which is 96% carbon dioxide. This demonstration helps mission planners test ways of using Mars' natural resources to support human explorers and improve designs for life support, transportation, and other important systems for living and working on Mars. The rover also monitors weather and dust in the Martian atmosphere. Such studies are important for understanding daily and seasonal changes on Mars, and will help future human explorers better predict Martian weather.