Meta Stack Exchange is a question and answer site for meta-discussion of the Stack Exchange family of Q&A websites. It only takes a minute to sign up.

Reducing the weight of our footer

As you may be aware, we’re deprecating our mobile views, so with that in mind, it would only make sense to try to reduce the page weight in the responsive views that’ll be replacing them.

Currently, our footer is a bit bigger than it ought to be, and since it appears on every page, it is very overwhelming. Therefore, we came to the conclusion that something’s gotta go.

We’ve decided to reduce the number of links in our footer under the Stack Exchange header.

Why are we doing this?

If you'd reduced the footer like this years ago, I wouldn't be here.

I'm against this change on principle, as you're getting rid of the thing that made me realise there's a Stack Exchange network and ultimately made me a prominent member of several communities. Yeah yeah, I'm only one person, and maybe an outlier if these links are clicked as rarely as you say, but I'm here to represent all the people (surely I'm not the only one) who discovered the network through those footer links.

This is literally my SE origin story:

I saw [Science Fiction & Fantasy] on the list of SEs at the bottom of the page, back in 2012 when I used to ask occasionally on Maths.SE. Lurked for a couple of years, eventually signed up in 2014.

It was from a footer link that I discovered the first SE site that I signed up for (where I now have 130,000 reputation). Later I discovered other SE sites from the HNQ list and signed up to them too, but my lurking on Science Fiction & Fantasy SE, and ultimately my membership and moderatorship, began with a footer link.

TL;DR: I has a sad. I'm sure you're not going to let this affect your decision, and frankly nor should you - I'm just one person, even if I do have 350,000 network reputation and two moderator diamonds. (But I'm interested to see if anyone else will comment on this post to say they also arrived on the network via the footer. Fellow footer explorers, speak out now!) On a more practical note:

The HNQ list is probably the main way that most people find "other" network sites after the first one they started browsing. But if I'd only been exposed to SFF through HNQ titles, maybe I wouldn't have been interested enough to click through. I'm a fan of fantasy novels, but not of Star Wars or Star Trek or Marvel or DC, not particularly of Harry Potter or Game of Thrones / A Song of Ice and Fire. So the name "Science Fiction & Fantasy" jumped out at me as something I'd be interested in, which most HNQs from that site (except Lord of the Rings ones) wouldn't have done.

So that's why the footer link was more attractive to me than HNQ links (which I think didn't exist back then, but anyway). My constructive suggestion to you would be: please think about how to promote the many network sites other than by promoting their popular questions. People who have knowledge/expertise about a general topic but not in the "popular" parts of it, "hipsters" if you like - those are exactly the people that many sites really want and need! I know several sites have a problem with being too weighted towards some specific subset of their scope (e.g. Dungeons & Dragons on Role-Playing Games SE, Magic the Gathering on Board & Card Games SE, etc.), and promoting sites via HNQ is only going to exacerbate that problem.

Promoting sites by the site name, which includes all of the site's scope, is a better way of bringing in people interested/expert in that topic without weighting them towards the parts that are already popular. If you're getting rid of those links in the footer, at least try to promote network site names somewhere else. For example, maybe the "Featured Site" thingy here could actually become a more visible feature rather than something hidden on a page that hardly anyone goes to check?

The categories with two words in them are now separated with an ampersand & and the second word is uncapitalized, instead of a slash / and capitalization, as before: 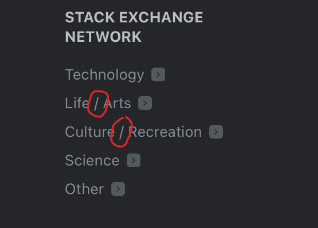 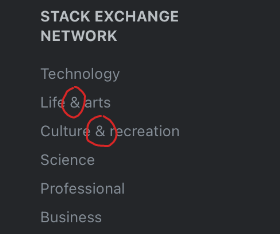 The page they link to ("All Sites" tabs) uses slashes and the second word is capitalized:

The "Life & arts" link leads to the list of "Technology" sites.

If they're used that sparingly indeed, it will slightly reduce the page size and marketing says they're actually in favour of removing them, I see no downsides.

Perhaps replacing them by a single link would be of benefit to the few people who do still use them, where the single link goes to the list of all SE sites? That page already has categories and filters. No need to re-invent the wheel.

While you're at it, the readability of the links against the background image (at least on this site) is pretty poor.

It varies a bit depending on exact screen size, but those text bubbles clash with various links - "Legal" and "Privacy Policy" in this example. The contrast gets very low.

Currently there are two links duplicated in the footer. I suggest we remove those duplicates as well.

About and Company link to the same page, and so do Legal and Terms of Service. I'd suggest removing the About and the Legal links, as they are redundant.

I did the translations for the updated footer in Stack Overflow in Russian, but I can't translate "STACK EXCHANGE NETWORK" like "СЕТЬ STACK EXCHANGE". For some reason there is explicit <br> inside the string:

So there is no full sentence visible in Tradicir related to that footer's text: 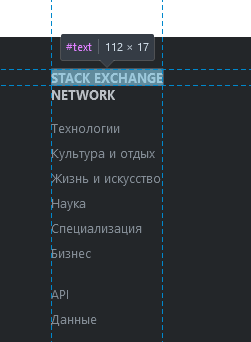 Not sure why you switched the order in the footer compared to the order of the list on the network site. The "Life & arts" and "Culture & recreation" are swapped on the footer below.

I had noticed that some sites were missed, this certainly saves updating the list and lightens the pages weight.

Can someone briefly explain how a footer with fewer links is expected to improve search engine optimization?

Licensing link in the footer refers to https://stackoverflow.com/help/licensing for all SE sites:

I'm not quite sure about the link before, but every SE site has it's own page in the Help Center about licensing. E.g. here on Meta SE https://meta.stackexchange.com/help/licensing

So why does the link in the footer refer to Stack Overflow instead of the current site?

More over non-English sites have translated help and that may be a little bit confusing.

Regarding the footer changes

Perhaps on smaller / mobile screens the entire footer could be collapsed into a single bar (revealing the rest via CSS on mouseover/mobile touch)?

Regarding the removal of the ‘mobile’ site

Before you go ahead with the switchover, please try and make sure the responsive view on mobile has parity with the existing ‘mobile’ site.

Here is a page found at random:

These are screenshots from my iPhone of that page as it appears (as of earlier today), in the deprecated ‘mobile’ view (A) and the ‘full-site’ view in both ‘responsive’ (B) and ‘non-responsive’ (C)/(D) modes (higher-resolution pdf version): 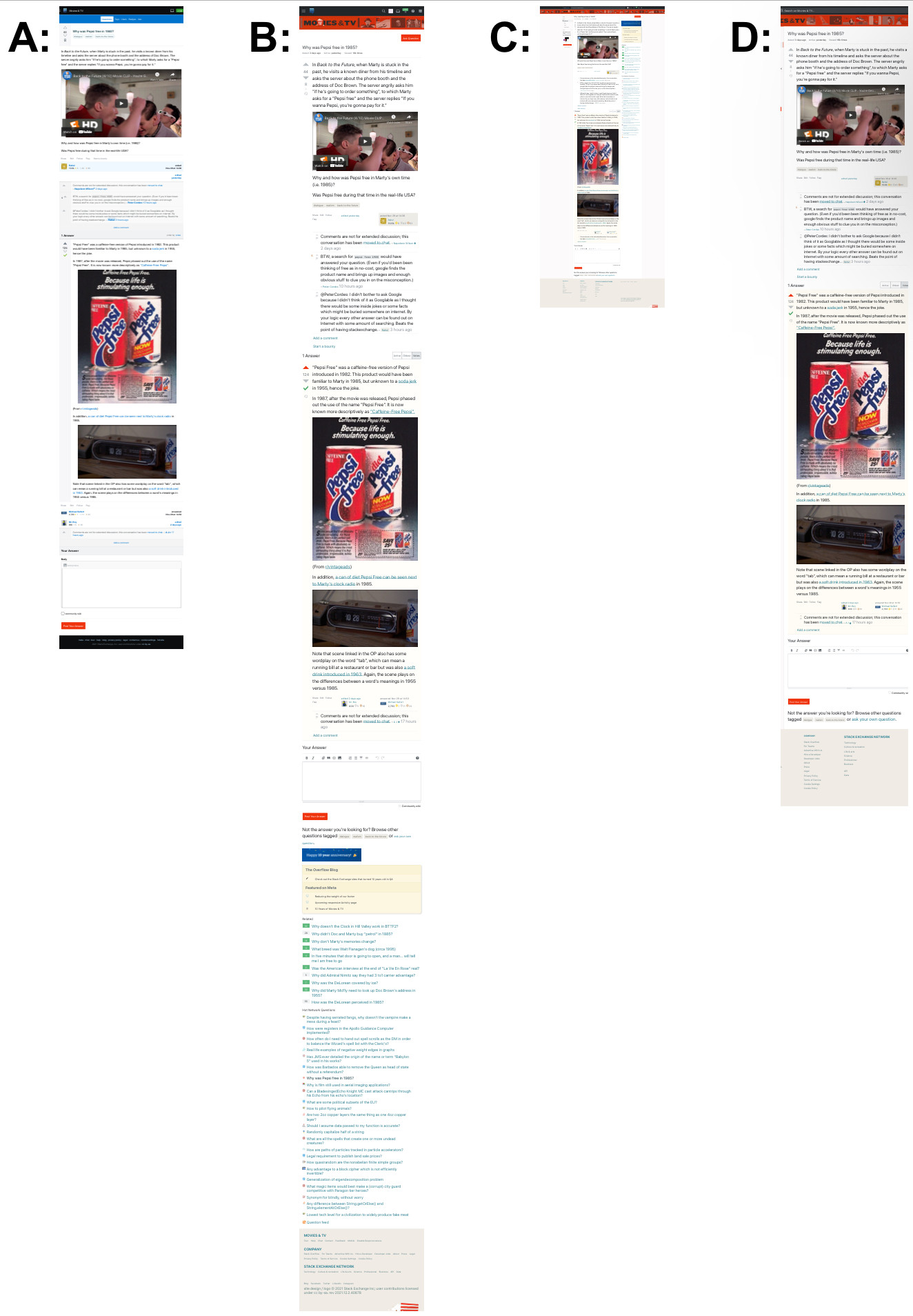 Legend (and links to individual screenshots):

* (besides the obvious and excessive difference in length)

In the existing ‘Mobile’ view:

As I understand*, the current plan is that A and the footer link to C will be going away soon.

(I assume that ‘C’, or at least something like ‘C’, will continue to be available by selecting the “Show Desktop Site” option in a mobile browser.)

Just have one link to a page of categories, and then the categories lead to their links.

I often need to go to the Full Site in order to see a question's View count, which is hidden on mobile:
Cannot see number of views for question on mobile?

The "full site" link in the footer is very difficult to tap with a fat finger on mobile without zooming in.

I would say that all of those links should be easier to tap, but "full site" is the one that I use a lot. Please make it, or all of them, easier to tap on the new mobile footer.

As a moderator, the expandable links were really helpful to me and I miss them a lot. They made it easy to point to sister-sites when a question was OT but would fit there, helping to find the link to the fitting one. While this still can be done after following the link to, say, "Technology", that means another browser tab and a full page load. And there, those 4k saved turn into how many k wasted?

S/O Dev: Woohoo! We managed to 4K to our page footer!

S/O Marketing: Great! now can you add this 400K javascript advertising tracker for us ?

Sometimes, links are like smoke alarms ... they are hardly ever used, most people don't really think about them that often, they may occasionally be annoying, but every now and the, you're really glad they're there.

Wouldn't hurt to cut more. Websites are often overweight nowadays. All you really need is the copyright notice, IMO.

There are links to the other sites on the network in the right sidebar, and the site draws attention to them in various other ways. People can nose around the site easily enough to find out more.

Don't be afraid to cut the bloat.

Not the answer you're looking for? Browse other questions tagged discussion design responsive-design footer .

7
Provide a link to Stack Exchange API in the footer
11
Ask Patents and The Workplace are missing from the footer
493
Congratulations to our 29 oldest beta sites - They're now no longer beta!
216
Mobile optimized version of Stack Overflow
216
Deprecating our mobile views
18
Please don't completely remove the mobile website, for the benefit of users on slow connections
27
How about doing something more with the "Today's Featured Site" thing?
28
Include comment markdown formatting in "Share" link
11
The in-review-queues edit layout is different from the normal (out-of-review-queues) edit layout on mobile. How can I always use the former?
7
Why does the license link take me to Stack Overflow's license page?
See more linked questions

534
The MIT License – Clarity on Using Code on Stack Overflow and Stack Exchange
2784
A Terms of Service update restricting companies that scrape your profile information without your permission
2481
Firing mods and forced relicensing: is Stack Exchange still interested in cooperating with the community?
550
The company’s commitment to rebuilding the relationship with you, our community
580
We're switching to CommonMark
307
Goodbye, Prettify. Hello highlight.js! Swapping out our Syntax Highlighter
744
New Feature: Table Support
408
Swag is coming back!
365
Stack Overflow for Teams is now free for up to 50 users, forever
216
Deprecating our mobile views