Science Fiction & Fantasy Stack Exchange is a question and answer site for science fiction and fantasy enthusiasts. It only takes a minute to sign up.

I read this novel at least 25 years ago, maybe more. I don't remember the cover.

There is a joke: How does an elephant come down from a tree ? It sits on a leaf and waits for autumn.

Well, this is how this book begins, by an army of elephant-looking aliens reaching Earth on gliders. And soon they control most of it.

One thing that I remember is that with them everything went by three (or maybe by four ?): their trunks that ended in many delicate "fingers", 9 or more (16?) ; their armies that were organized in a hierarchy by 3 or 4; and so on.

I don't remember much except that those who on Earth tried to keep fighting managed to leave the surface by a rather brutal method: huge (and very thick) metallic plates propelled by exploding nuclear bombs on their down side. (I don't remember how they manage to explode nuclear bombs progressively rather than all the bombs at once).

I think that by that method, once the "elephants" lose full control of the sky, mankind manages to win the war.

This is Footfall by Larry Niven and Jerry Pournelle.

The alien Fithp resemble baby elephants with multiple prehensile trunks. They possess more advanced technology than humans, but did not develop any of it on their own. In the distant past on their planet, another species was dominant. The predecessor species badly damaged the environment, rendering itself and many other species extinct, but left behind their knowledge inscribed on large stone cubes from which the Fithp gained their technology. An arms race between two rival herds threatened to render the species extinct, so they wagered to see who would depart in a starship and seek a new home elsewhere. The leadership of the loser formed the Chtaptisk Fithp ('Traveling Herd').
...
The US secretly builds a large, heavily armed spacecraft in Washington state that is propelled by nuclear bombs, a real concept known as Project Orion 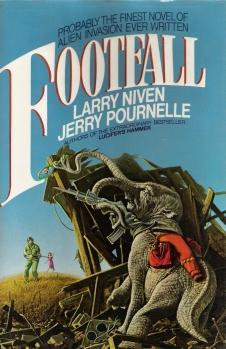 For the record, the alien's society appears to be based on the number eight

“There were eights of eight-cubed of thuktunthp scattered about the world. The Predecessors.
...
They would drown, by eight to the eighths. The Herdmaster mourned in advance. “Have you chosen our foothold?’

Not the answer you're looking for? Browse other questions tagged story-identification aliens nuclear-weapons or ask your own question.

10
Lizard Men from Space Invade Earth
5
Book where rat-like aliens invade Earth and enslave humanity
10
Serial Scifi story, with some nasty form of Immortality at the end
12
Short SciFi story where humans join and evolve into a kind of multi-creature
12
Book with boy with one different colored eye
17
Anyone tell me the name of this half-remembered sci-fi story about a genius teaboy?
25
Story about shapeshifting aliens trying to invade Earth, thwarted by biodiversity
9
Book where Martians invade Earth because their own resources were dwindling