This course provides an introduction to application programming with WebGL. We introduce both the API and its integration within the HTML5 framework. Our focus will include basic applications of WebGL and converting from desktop OpenGL to WebGL.

WebGL 2.0 has landed, and future of web graphics is here. What are the current state-of-the-art web graphics rendering techniques? We will cover many new features, including geometry instancing, transform feedback, and 3D textures. Attendees will take away rendering and optimisation techniques with WebGL 2.0. 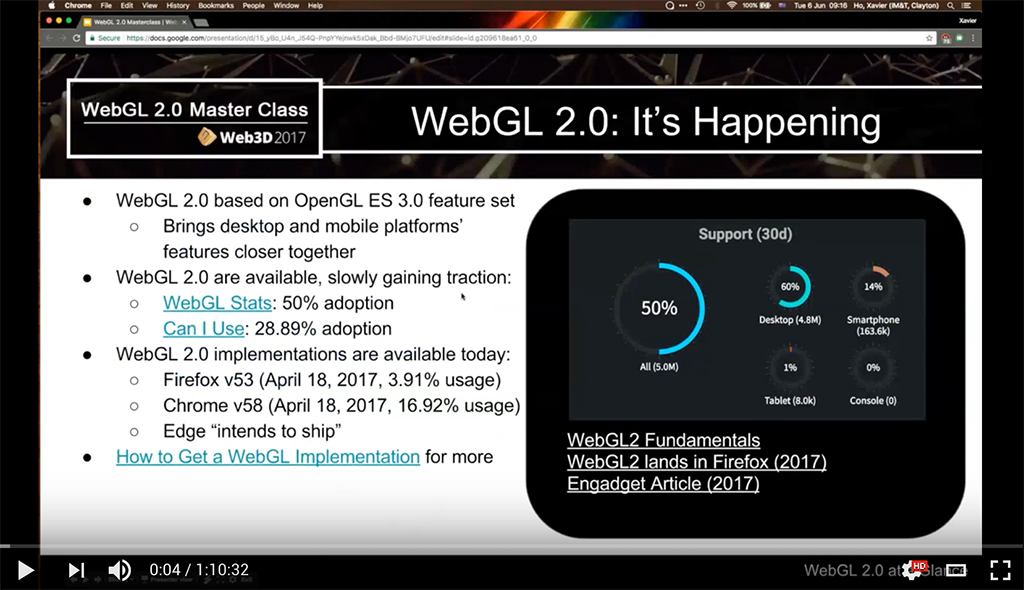 The slides are accessible in Google Slides.

Ed Angel is Professor Emeritus of Computer Science at the University of New Mexico and the Founding Director of the Art, Research, Technology and Science Laboratory (ARTS Lab). He has over 25 years of experience in research and teaching in computer graphics and image processing. He is the coauthor of the popular textbook: Interactive Computer Graphics (7th Edition; Pearson Education; 2015). He has taught over 100 professional courses worldwide, including at SIGGRAPH and SIGGRAPH Asia since 1985.

Xavier is a curiosity-driven designer, researcher and software engineer. He currently works for CSIRO creating interactive data visualisations. Pursuing a PhD part-time at University of Sydney keeps him busy, and sometimes he wonders about machines and humans and that philosophical lot. Previously, Xavier worked in a Sydney startup doing computer vision work, freelanced as a videographer, and taught a handful of programming classes to university design students. His passion lies somewhere in the spectrum of chocolates, video games, and a better world.

Juan is a technical director, software engineer, and researcher specializing in computer graphics, machine learning, and mixed reality experiences. He currently works for DigitalFish and Google Spotlight Stories creating immersive stories for mobile 360, mobile VR, and room-scale VR headsets, and is the VR/AR Showcase Chair for SIGGRAPH Asia 2017 Bangkok, Thailand. In his down time he develops intelligent training and control software for prototyping bionic hands in AR, puts together tech/art installations exploring the human impact of computing, and serves on the Professional Development Committee of the ACM Practitioner's Board as well as having leadership and expertise roles within ACM SIGGRAPH. Previously, Juan was an undergraduate researcher at the Visual Computing Lab of the University of California, Berkeley under Professor James F. O'Brien, and worked at both Walt Disney Animation Studios and Pixar Animation Studios.

Neil Trevett is Vice President of Mobile Ecosystems at NVIDIA, where he is responsible for enabling and encouraging advanced applications on smartphones and tablets. Neil is also serving as the elected President of the Khronos Group where he created and chaired the OpenGL ES working group that has defined the industry standard for 3D graphics on mobile devices. At Khronos he also chairs the OpenCL working group for portable, parallel heterogeneous computing, helped initiate the WebGL standard that is bringing interactive 3D graphics to the Web and is now working to help formulate standards for camera, vision and sensor processing. Previously, as Vice President of 3Dlabs, Neil was at the forefront of the silicon revolution bringing interactive 3D to the PC, and he established the embedded graphics division of 3Dlabs to bring advanced visual processing to a wide-range of non-PC platforms. Neil was elected President for eight consecutive years of the Web3D Consortium dedicated to creating open standards for communicating real-time 3D on the Internet. Neil graduated from Birmingham University in the UK with a First Class Joint Honors B.Sc. in electronic engineering and computer science and holds several patents in the area of graphics technology.