The Khronos Group would like to welcome its newest Contributor Member GuangDong OPPO Mobile Telecommunications Corp. For the last 10 years, OPPO has been focusing on manufacturing camera phones, while innovating mobile photography technology breakthroughs. Today, OPPO provides excellent smartphone photography experiences to over 200 million young people around the world.

FReality Podcast has just posted a good segment about OpenXR... and many other VR topics too! Episode #73 of FReality Podcast talks about everything VR, AR and MR related! The Podcast is streamed every Saturday at 7pm in Europe, 6pm UK and 12 midday Central US on YouTube.

SDL Picks Up An Initial OpenSL ES Implementation For Android

Helping to make the SDL cross-platform library more attractive for mobile/Android developers, the latest SDL2 code has an initial OpenSL ES implementation. OpenSL ES is the Khronos Group’s effort as an industry-standard sound library for embedded hardware while offering up 3D positional audio support, optional integration with OpenMAX, audio effects, and other advanced sound capabilities. More details may be found on Phoronix with a diff of the merge here.

If you are attending GDC 2019, be sure to mark March 19th in your calendar. Khronos will be hosting the annual Developer Day sessions in the Moscone West, Room 2020 from 10am to 6:30PM. This year there will be six (6) sessions covering glTF, WebGL, OpenXR, Vulkan and OpenGL ES. There will also be an OpenXR table at VRDC where you can learn more about OpenXR, talk with OpenXR working group members, and learn how your company can implement or join in the development of this important industry standard. The Khronos Group is once again sponsoring the WebGL/WebVR Meetup. Last year we had over 200 RSVPs and an amazing lineup of speakers. Join Khronos member Patrick Cozzi (Cesium) and other speakers for this gathering of the Silicon Valley WebGL/WebVR meetup group.

Be sure to bookmark the Khronos Developer Day page!

Intel’s Brent Insko has taken over as the Chair of the OpenXR working group after Epic’s Nick Whiting passed the torch. The pair say the OpenXR effort is still going strong, and a progress update is planned for March. Read more from the interview on Road To VR.

Less than a week left to submit your paper, talk, poster, tutorial or workshop to the annual OpenCL conference, IWOCL 2019! This year Northeastern University is pleased to welcome the 7th Annual International Workshop on OpenCL to Boston in 2019.

The traditional programming models and open standards for communications between processing elements have been left behind somewhat. The interconnect topologies have become more complex and fragmented. No longer is there a clear, unified communication standard that is suitable for all the new interfaces introduced by these heterogeneous architectures. Abaco felt no existing open standard API provided a unified solution. Abaco presented their case the Khronos Group proposing a new standard API called Takyon. Khronos has listened and created the “Heterogeneous Communications” Exploratory Group with a goal to gather industry support for development of a new standard and solicit additional proposals. Take a look and contribute here. For a more in-depth description of the problem, be sure to read Abaco’s blog “Behind the times”.

MoltenVK updated for Vulkan 1.1.97 and other improvements

How-to convert a 3D file to glTF with Sketchfab

If you have a 3D file you would like in glTF format, Sketchfab has the answer. They now support over 50 formats! Visit the 3D File Formats help page for more information. 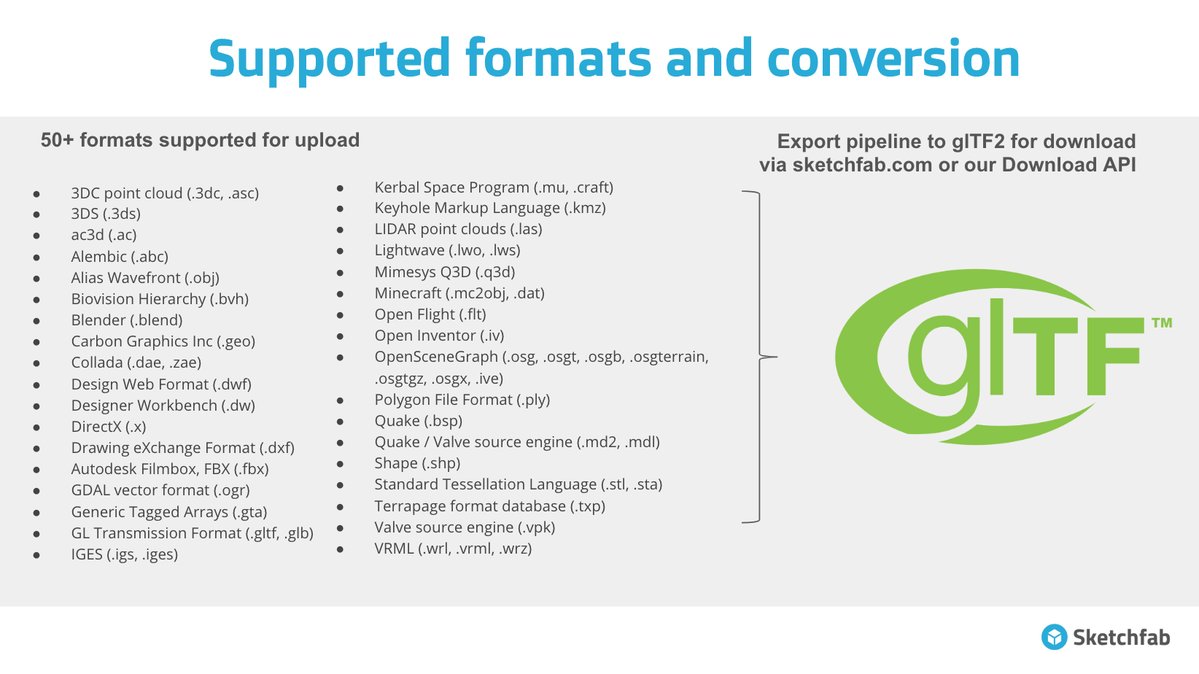 The Khronos Group is running a survey on Vulkan learning materials and general education. Feedback will be used to guide our future planning in this area as we look to improve our resources. Take this opportunity to share your thoughts with us, it will effect the future of the Vulkan education and the findings will be presented to the Vulkan Working Group.

Codeplay are attending the January Khronos F2F in San Diego 2019

Illya Rudkin, Principal Engineer Safety-Critical Software, Alastair Murray, Principal Software Engineer and Victor Lomuller, Senior Software Engineer Compilers and SPIR-V, will be attending this year’s Khronos F2F event in San Diego from 21st to the 25th January, 2019. Illya, Alastair and Victor would be delighted to speak to anyone attending the event interested in connecting Artificial Intelligence to Silicon. Please track them down via LinkedIn or using their contact form on Codeplay’s website or follow them on Twitter @codeplaysoft.

TensorFlow announced that you will now be able to leverage mobile GPUs for select models with the release of developer preview of the GPU backend for TensorFlow Lite. This new backend leverages. OpenGL ES 3.1 Compute Shaders on Android devices.

The Khronos Safety Critical Advisory Forum: Continuing to grow in 2019

The Khronos Safety Critical Advisory Forum (KSCAF) gathers safety critical experts from a wide range of disciplines, such as transportation and medical imaging, who have experience developing software and products to widely adopting standards. The goal of KSCAF is to develop guidelines and recommendations for engineers creating open standard APIs within Khronos, and elsewhere in the industry, so that those standards can help streamline the product safety certification process. The Forum’s chair looks back on a successful 2018, with plans to expand in the new year ahead.

Intel compiler engineer Alexey Bader sent out a public “request for comments” on the idea of adding SYCL to the LLVM Clang compiler stack. He wrote, “We (Intel) would like to request to add SYCL programming model support to LLVM/Clang project to facilitate collaboration on C++ single-source heterogeneous programming for accelerators like GPU, FPGA, DSP, etc. from different hardware and software vendors.” Learn more about this initiative or read the original letter.

No more pages to load