Now go to github 'https://github.com/<username>/WebGL' and in the left area you should see a button "branch:master". Click it and pick your branch 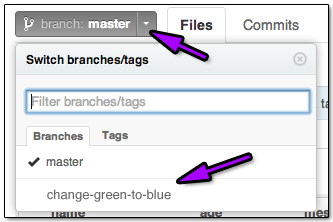 Check the settings are correct. You'll be asking KhronosGroup/WebGL master (left) to pull in your changes from "<username>/WebGL" change-green-to-blue

Switch to some branch other than the one you want to delete. The `master` branch, the branch that was created when you first cloned your repo will do