Jump to content
From mediawiki.org
Translate this page
Other languages:
This extension comes with MediaWiki 1.31 and above. Thus you do not have to download it again. However, you still need to follow the other instructions provided.

Replace Text is an extension to MediaWiki that provides a special page, as well as a command-line script, to allow administrators to do a server-side global string find-and-replace on both the text and titles of the wiki's content pages.

The replace text operation is a deferred operation and posted to the job queue. You can run runJobs.php from the maintenance folder to perform the replacement immediately and process the job queue.

Replace Text defines a special page, at "Special:ReplaceText" (or its equivalent in another language), that handles global searching and replacing; it also defines a script, replaceAll.php, that does the same thing from the command line. This documentation will cover the special page first, then the command-line script.

The page Special:ReplaceText initially displays a form for an administrator to fill out the search-and-replace details: the administrator enters a search string and its replacement, the set of namespaces on which to search, as well as choosing whether to replace text within page contents, page titles, or both. Optionally, the administrator can also add two additional filters: the name of a category that all pages must belong to, and a prefix that all page names must start with. When this form is submitted, they are then shown a list of either all the pages that contain that search string, or all the pages whose titles contain the search string, or both. Next to each page name is a checkbox for each, so that they can unselect whichever pages they don't want replaced. The user then can hit "Replace" to do the actual replacement. Once a text replace is done, it is not directly undoable; though you can always run a "reverse" replace, replacing the new string with the original string. For that reason, if the replacement string is blank or is a string that already exists in the wiki, the user is shown a warning message.

If the search string is contained multiple times on a page, every such instance is replaced. Every page's replacements shows up as a (minor) wiki edit, with the administrator who performed the text replacement as the user who made the edit and an edit summary that looks like "Text replace: 'search string' to 'replacement string'".

The search is case-sensitive. See below for how to make it case-insensitive.

If you are using a MySQL or PostgreSQL database, you will see a "Use regular expressions" checkbox within the Special:ReplaceText form. This checkbox does not appear for SQLite databases, because SQLite lacks a native "REGEXP" operator.

If you click on this checkbox, you can use regular expressions, or regexps, within the search and replacement strings. The set of regular expressions allowed is basically a small subset of the PHP and MySQL/PostgreSQL regular-expression set. The special characters that one can use in the search string are "( ) . * + ? [ ] |", and within the replacement string one can use values like $1, $2 etc. (To use these as regular characters, you just need to escape them by adding a "\" beforehand - which you would also need to do with the "/" character.) This section will not give a tutorial on using regular expressions (the Wikipedia article is a good place to start for that, as is this page on MySQL regexps), but here is the basic example listed in the inline explanation:

This would look for pages containing the letter 'a', the letter 'c', and any text in between (signified by the ".*"). It would then put that middle text after the 'a' and 'c' - the "$1" in the replacement string refers to the first element of the search string contained within parentheses (in this case, there's only one).

For every page for which the replace is actually called, the replacement would happen for every occurrence of the search string, not just one - just as happens with regular, non-regular-expression search.

First the word "hello" is matched. In brackets follows an expression to search for any digits "0-9". The following asterisk finds multiple matches of the preceding element. The brackets and the asterisk get enclosed with parantheses, so we match the complete term and transfer it to $1. The "\." indicates that it's a true dot, and not a special character. The second expression within parentheses is matched and put into $2.

The following will not work:

That's because the search will think the number of the replacement is 1123456, not 1. Instead, you should have the following:

In general, you can always enclose numbered values in curly brackets.

The above will unify the casing of all mentions of iPhone/iphone/IPHONE to iPhone.

Replace Text offers a script, replaceAll.php, in the /maintenance directory, which can be run from the command line, and which does all the same replacements that the page Special:ReplaceText does. The first two arguments for this script should be the search text and the replacement text; you can call this script simply like the following:

If you use numbered values like $1 in the replacement string, you have to either escape them inside double quotes like "ac\$1" or use single quotes. Otherwise the shell will put blanks in their place as it thinks they are variables.

Other possible arguments/flags for this script are:

Additionally, there are two flags that strictly print out helpful information unrelated to a specific text replacement:

(You can also see all of these options by calling "php replaceAll.php --help".)

Assigning replacements to a user[edit]

By default, all replacements are credited in the page history to the user who initiated them. However, you can instead have replacements be credited to a pre-set user -- such as a bot account -- by adding a line like this to LocalSettings.php, below the inclusion of Replace Text:

The username specified must already be an account on the wiki. It will be added to MediaWiki's array of usernames which may not be registered or logged in from.

Below are images of the workflow of Replace Text. First, the initial page in which "George F. Will" and "George Will" are entered for the target string and replacement string, respectively, and replacing text in page titles is specified as well, on Discourse DB: 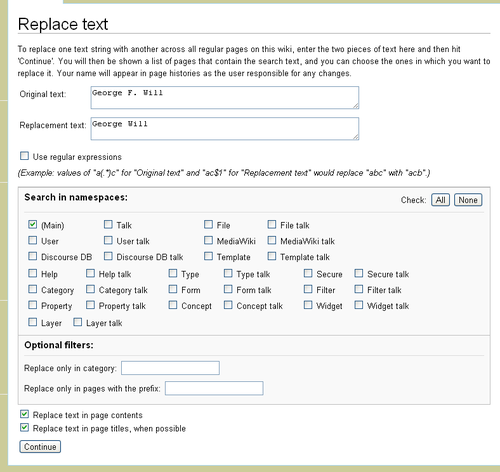 Note: the check "All" and "None" boxes only show up when using the Vector skin, or skins based off of it.

And here is what the page looks like after the user hits "Continue": 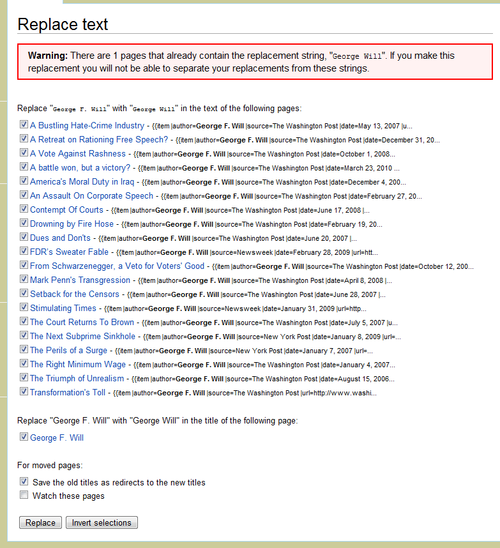 Hitting "Replace" would replace this value in all of the listed pages, as well as moving the page at the end to its new value.

Contributing to the project[edit]

Send any bug reports and requests to Yaron Koren, at yaron57

Contributing patches to the project[edit]

If you found some bug and fixed it, or created a new feature, please either do a Git commit with your code, or create a patch by going to the "ReplaceText" directory, and typing:

If you created a patch, please send it, along with a description, to Yaron Koren.

Translation of Replace Text is done through translatewiki.net. The translation for this extension can be found here. To add language values or change existing ones, you should create an account on translatewiki.net, then request permission from the administrators to translate a certain language or languages on this page (this is a very simple process). Once you have permission for a given language, you can log in and add or edit whatever messages you want to in that language.